Our artist talk with the visual artist Ines-Noor Chaqroun from Morocco. 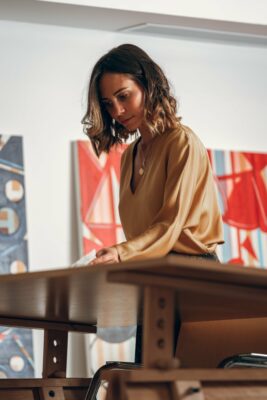 1)     Is it your first participation to Afrikin Art exhibit?

Yes, it’s my first participation to African Art exhibit.  And what a pleasure and honor, as a Moroccan female artist, to be part of AfriKin family.

As being Moroccan, therefore white-skinned African women, I would very much like to globalize the question and think about what it means to me to be an Artist who is part of the long segregated and sidelined minority of Africans.

So if I look at this question, for me a Black artist is above all an Artist. But an artist who, in the 21st century, has the particularity of having a depth that many cultures cannot prevail. The painful past of African colonies and the exploitation of Blacks in the world is perhaps in a way a strength today, without having to be our only identity.

As I have been noticing, today we are witnessing an artistic panel of such scope that art brings together a lot of more or less relevant pieces around the world.

However, what is certain is that African Artists (Black and White) have :

We have a past, which may have been a common and individual suffering, but which today is our strength as African Artists.

A Black artist is thus, for me: An authentic artist, who, because of his heavy ancestral past, is not absorbed by the current artistic vagueness. (S)he feels invested in the mission of delivering an honest and sincere message.

3)     Why is it important, according to you, for Black Art to be celebrated during Black History Month?

The Black History Month brought to the world the chance to know more about what segregation have been; how hard and unspeakable it has been. But also and mostly how strong Black women and men have been throughout the history of the past century and to pay homage to these human forces.

As I was able to express in the previous question, for me Black Art is fundamental in the international art scene because it wants to be strong, deep and sincere. While other kinds of Art want to be conceptual and sometimes empty (in my opinion).

But it seems to me that for a long time, Black artists have not been valued at their fair value, especially women (like everywhere in the artworld history). They were not recognized, except by the settlers who were able to steal masterpieces of African art…

In short, it is only recently that African art has taken over and is now part of the « important Arts », not only in terms of culture, but also of beauty. It is therefore not only important but fundamental to celebrate Black Art during Black History Month, because it promotes Black history but even more, it is fundamentally part of the construction of it.

4)     What will you be presenting at the exhibit?

I will be presenting 3 paintings at the exhibit.

* “HOW WE PLAY-GROUND” represents the games of maternal body sexualisation and social deceit. And it’s all about seeing that behind the most innocent children’s games there can be a sneaky slippery ground.

* “WANAWAKE”, subtitled « they are our lands » is a tribute to the Black African woman. Who is a woman (« wanawake » in Swahili) beautiful and desirable; an object of pleasure and sexual games; a mother; and the shining fruit of the world’s homeland: Africa.

*“UPSIDE AND OUT” is about intra-uterine death; the absence of maternity; bundle of this emptiness and the cord of life, linking the dead to the living but also the mother to her deceased. And the Female strength supports the disappearance on the upper part of her body.

I am a 31-year-old Moroccan visual artist mainly based in Casablanca, Morocco.

Mostly a painter that loves using oil painting. I also enjoy melting different kind of techniques to leave the opportunity to my emotions to have the largest possible panel to materialize on the canvas, support of these and of its own desires. Because, I am convinced that in the same way of sharing emotions between living beings, the sharing of these between living beings and  inanimate objects allows the messages to be stronger and more impactful. As the art permits it more easily.

As an autodidact in this art-world, I always considered having a dialogue with my canvas and colors that give me the chance to externalize my deepest chimeras.

My art is committed to emotions, aimed by the externalization of deep sensations and free course to my unconscious creatures melted with my personal history and my vision of women in our societies.

So, the “message of my art” is in a first measure: freedom. I try, through my paintings, to share my vision of it, which, according to me, passes on the one hand, by detachment and social liberation and on the other hand, by the acceptance of death and life, intimately linked.

6)     Who are some of the artists you’ve been influenced by or inspired by?

It may sound strange, but I still have a hard time answering this question because my main inspirations are: my inner Being, emotions and the Universe energies. I do not confine myself to art to inspire my art but much more to what is not proper art to create it.

However, it is undeniable that the metaphysical painting of Giorgio De Chirico marked me a lot in my youth.

And, that Sonia and Robert Delaunay’s Orphism, fascinated by chromatic research and scientific work then by the autonomy of colors in their abstract paintings, are the second painters who marked my soul. Probably because both their works are the simple fruit of imagination and feelings.

But, Kandinsky is without hesitation the very first artist who captured all my attention, my eye, my mind and my soul at the same time. It is a source of inspiration for me because it represents a real break in Art History: the passage from figuration to abstraction.

All the genius of the Russian expressionist artist Kandinsky is materialized by color who has the power to speak “from soul to soul” without the need of identification. Only lines, circles and colors create a graphic and colorful conversation between different elements without any referential one.

Kandinsky is so inspiring for me because he reflects the liberation and total freedom where emotion transforms the outside world, in favor of the dream, until it becomes unidentifiable.

Today Abderrahim Iqbi, a Moroccan expressionist, and the contemporary American artists, Kenny Scharf, have my heart but I could not say that they really inspire me.